DeWolf descendants to return to Cuba with Freedom Schooner Amistad 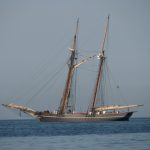 It was announced this morning that The Freedom Schooner Amistad will visit Cuba next week as part of the United Nations commemoration of March 25 as the global Day of Remembrance for the victims of the Atlantic Slave Trade. Joining the Amistad team will be my cousins Katrina Browne and James DeWolf Perry along with Tulaine Shabazz Marshall, the Project Director for the partnership between Amistad America and Traces of the Trade.

The Cuban premiere of Traces of the Trade will take place on March 27 at Casa de Africa in Old Havana. Katrina and James will be reunited with many members of the Cuban crew that worked on the film and they hope to reconnect with several friends we made when we visited Cuba in 2001.

Amistad America, Inc. is a non-profit educational organization headquartered in New Haven, Connecticut. The Freedom Schooner Amistad is a replica of the ship that sailed from Cuba in 1839 with a group of enslaved people, most of whom had been kidnapped from Sierra Leone. They revolted, killing the captain and the cook. They were recaptured two months later near Long Island, NY and eventually freed after 2 years and 3 trials. The story of the Amistad is well-known in the United States due to the 1997 Stephen Spielberg film.

The Amistad will enter Cuban waters on March 22, 2010 for a 10-day, two city Cuba tour that will culminate its recent Caribbean Heritage Voyage. The ship will first visit Matanzas, site of a new UNESCO-affiliated slavery museum. On March 25, the Amistad will sail into Havana Harbor to commemorate the historic “triangle of trade” connections between America, Europe, Africa and the Caribbean. The next day, the vessel will host a three-hour simulcast about the shared slave trade heritage, connecting Cuban students to classrooms across the Atlantic Ocean and at the UN in New York. In addition to public tours of the boat and academic panels on its history, the Cuba visits will focus on the impact of the slave trade on our transatlantic cultural heritage – including religious ritual, film, music, dance, poetry and visits to former plantations.

‘The sale of the Amistad captives in Havana was a small transaction in the thriving international slave trade,’ said Gregory Belanger, president of Amistad America Inc. ‘But the resulting events arguably turned the tide against slavery itself – and the historical connections across the modern African diaspora are direct and profound.’

On June 21, 2008, several members of the Traces of the Trade family (Katrina, James, Jim, Holly, and I) had the good fortune to sail into port at Long Wharf in New Haven, Connecticut aboard the Amistad which was returning home after a year-long, 14,000 mile, trans-Atlantic journey. I wrote about that experience here.

Following the current Caribbean tour, The Amistad will visit five North American cities with links to the trans-Atlantic slave trade. I encourage my friends in or near Savannah, GA, Charleston, SC, Norfolk, VA, Washington, DC, and Baltimore, MD to take advantage of a wonderful opportunity to board the ship and learn more about the history that continues to impact all of us today. Hopefully this is another productive step toward ending the embargo the United States has enforced against Cuba for almost 50 years.

You can see several photos from our 2001 Traces journey to Cuba here.