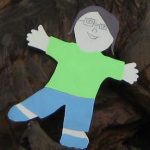 I had never heard of “Flat Stanley” when my lifelong friend Mike Godfrey wrote and asked if his son could send me his “Flat Justin” to spend some time with me. Mike and I grew up together because our parents were best friends. We went on vacations together and our families jointly owned a cabin in the mountains. We had some serious snowball fights over the years. I’m not sure there is anyone I spent more time with growing up than Mike until I moved to Oregon to attend college almost 40 years ago. I was honored that JJ chose me to send Flat Justin to.

As I understand it the Flat Stanley Project is an international literacy and community building project where elementary school students create a Stanley character that can be mailed in an envelope. Students from one school would mail their flat characters to students from a school in another part of the country (or the world) and those students create a journal that tells about where Flat Stanley is visiting.

So, variation on this theme, Mike’s son JJ sent his Flat Justin to me and I was to create a journal with pictures of Flat Justin in various places in and around our Central Oregon home/community. Well, Flat Justin learned about our home town all right, but my life takes me to many places around the country so I took Flat Justin with me to Alabama last week where I spoke at three different colleges in Birmingham and Mobile. I don’t know if JJ expected to learn about Birmingham in addition to Bend, but he’s going to nonetheless. I spent most of a day last week touring sites that were significant to the history of the Civil Rights movement and I hope that JJ, his classmates, his teacher, and even my buddy his father, are inspired to search more deeply into our nation’s history than is often the case; that JJ will know more than I did at his age about truth, justice, and equality and just how hard they are to achieve and maintain in our sometimes-not-so United States. (For anyone interested in seeing more photos than are included here, I’ve loaded quite a few onto my Facebook page).

After giving Flat Justin a tour of Central Oregon, here’s what I wrote to JJ:

In addition to being a writer, I speak at colleges and universities around the country about events in the history of the United States that have often been hidden. There are some pretty shameful things that have taken place that have caused a lot of harm to people. Many of those things continue to cause damage to people today. SO, we’re off! 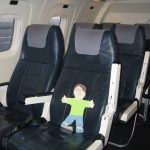 Tom and Flat Justin hopped on a plane and flew to Portland, then on to Atlanta, and finally to Birmingham… a LONG day’s travel.

Birmingham, Alabama was the sight of some of the key events in the Civil Rights movement in the 1960’s. This is the first time that I’ve had the opportunity to spend time there. I’m so glad that Flat Justin could go with me. I hope that my grandchildren, and YOU, JJ, have the opportunity to visit Birmingham some day. It is important to learn about our nation’s true history in order to understand why things are the way they are today. When you are a little older I hope you will read A People’s History of the United States in order to understand history from the perspective of people from other cultures, the workers, and disenfranchised people. It’s important to see things from all sides and to have compassion for others.

We went to Kelly Ingram Park (formerly West Park). This is a place of both “revolution” and “reconciliation.” Many black people were attacked by white people. Policemen with dogs even attacked black children. 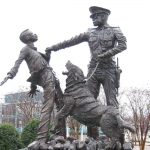 Kids as young as you, JJ, were arrested and thrown in jail for wanting to have equal rights with white children. Black people were attacked with dogs, fire hoses, bricks, chains, and bombs. It is hard to believe that these things took place during your dad’s and my lifetimes. There were so many brave people who stood up to injustice in non-violent ways. They changed America and the world. They helped us get closer to “liberty and justice for all.” They are my heroes.

This is 16th Street Baptist Church. In 1963, white men, members of the Ku Klux Klan, planted dynamite at the entrance to the basement of this church. When it exploded, four little girls (one was 11, the other three were 14) who were in the basement were killed because of the acts of these terrorists. 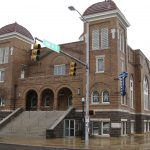 It took many years before some of the men who killed these girls were finally convicted of the murders. There is a wonderful movie called 4 Little Girls that your dad and mom can rent that tells the whole story. I hope you watch it someday. It is hard to watch because what took place was so horrible. But knowing the truth, seeking justice, and working for peace is what matters.

This is a statue of Fred Shuttlesworth outside the Civil Rights Institute. He is one of the true heroes of the Civil Rights Movement from Birmingham. He worked closely with Dr. Martin Luther King, Jr. and helped found the SCLC (Southern Christian Leadership Conference) which was one of the leading civil rights organizations. 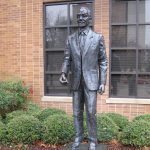 Reverend Shuttlesworth is 88 years old and today he lives in downtown Birmingham. I would love to meet him and thank him for his commitment to justice & freedom.

We next traveled from Birmingham to Mobile on the bus. I thought about the Freedom Riders, black people, and some white people, who rode buses into the Deep South in the early 1960’s to protest segregation. They were non-violent protesters and did not fight back when they were attacked and beaten. We had a layover in Montgomery and a friend picked me up and drove me by Dexter Avenue Baptist Church where Dr. King was the pastor from 1954-1960. 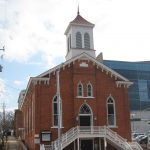 This is where the Montgomery Bus Boycott was organized in 1955 after Rosa Parks was arrested for refusing to give up her seat on the bus for a white person.

In Mobile, which was heavily damaged by Hurricane Katrina, we visited the University of Southern Alabama where I spoke to a sociology class. That evening I spoke at Spring Hill College at the invitation of a group called “The Quest for Social Justice.” I’m so happy that there are lots of people around the United States who believe in peace and justice and equality and truth and compassion and continue to work for all of them.

JJ, I don’t know if you were expecting to learn things about the Civil Rights movement when you sent Flat Justin to me, but here you go. I believe that we have come a long way on the road to justice in the United States during your dad’s and my lifetime. I also believe we have a long way to go before everyone has an equal chance for “life, liberty, and the pursuit of happiness.” I hope you will read many, many books about our nation’s history. More of them tell the “whole story” now than ever before. I hope you have teachers with the courage to tell all the stories, no matter how difficult they are to hear. It is important to learn the whole truth. A wise person once said, “the truth will set you free.” If you ever want some good ideas on books to read or movies to see that will help you on your journey toward justice and peace, just let me know. There are good stories for boys and girls your age and there are more for when you grow older.

There is a lot I didn’t go into with JJ. I hope this introduction will peak his interest and that he’ll explore more on his own and with his dad’s help. For instance, 45 years ago this past weekend, March 7, was Bloody Sunday, when hundreds of Civil Rights marchers attempted to walk from Selma to Montgomery and were brutally attacked by police with billy clubs and tear gas.  It is a challenge to figure out how to tell our children the truth about American history. Some of it is horrific beyond words.

But this is our work if we want to leave our descendants a more just and peaceful world than the one we inherited, and the one we currently live in. I look forward to hearing back from JJ once he has a chance to read my journal of Flat Justin’s travels to Oregon and Alabama.

JJ, there are many more places to go…