50 years ago: the Greensboro Sit-ins defied segregation and changed the world 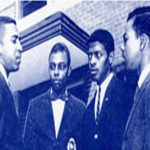 Fifty years ago today, on February 1, 1960 in Greensboro, North Carolina, four A&T College freshmen students, Ezell Blair (Jibreel Khazan) Jr., David Richmond, Franklin McCain and Joseph McNeil walked into the downtown Woolworth’s store and sat down at the whites–only lunch counter. They were denied service and refused to leave until the store closed.

Following their bold lead, twenty-five additional students from A&T and other Greensboro colleges joined them the next day. Before the end of February more than 250 demonstrations were held in cities across the United States. By the end of July that year, Woolworth’s was desegregated.

Through the Greensboro Sit-ins, these four young men demonstrated the power of non-violent resistance, increased the visibility and influence of the Civil Rights movement and helped change the course of history.

I’m troubled by the concept of Black History Month, which begins today and every February 1. I’m glad to see a focus on the significant contributions that people of African descent have always made in the United States of America; a focus that did not exist when I was a student and a focus that does not exist today in most school settings in months other than February. I’m troubled that in the minds of so many, Black history is seen as somehow separate from American history.

The story of the Greensboro sit-ins isn’t a story of black history in America. It is a story of brave Americans impacting American History.