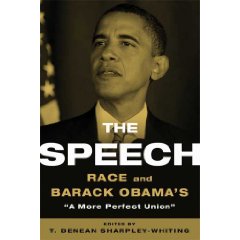 I was watching Book TV last weekend, as I occasionally do (I should watch it more often–I really learn a lot about the stories behind current books that may be well worth reading), and was completely mesmerized by a 75-minute panel discussion regarding The Speech: Race and Barack Obama’s “A More Perfect Union” (in which a variety of scholars contributed essays regarding the implications of Obama’s landmark speech in response to the Rev. Jeremiah Wright controversy that he gave at The Constitution Center in Philadelphia in March 2008.

Trust me. Take the time to watch this discussion here. It’s been a week and I’m still thinking about several issues that were brought up during the discussion.

Vanderbilt University in Nashville, Tennessee hosted this discussion. It is moderated by the editor of the book, T. Denean Sharpley-Whiting. Panelists include people who contributed essays:

Obery Hendricks, professor of biblical interpretation at the New York Theological Seminary, an ordained elder in the African Methodist Episcopal Church, and the author of Living Water.

Derrick Jackson, journalist with the Boston Globe, was part of the press corps following Obama on the campaign trail.

Adam Mansbach, author of Angry Black White Boy: A Novel, and The End of the Jews: A Novel.

Alice Randall, author of The Wind Done Gone: A Novel (a re-telling of Gone with the Wind from an enslaved person’s perspective) and the recently published Rebel Yell: A Novel.

Ms. Sharpley-Whiting reads a provocative quote from each of the contributors’ essays and asks them to explain. It’s a great way to create an exciting conversation.

Really, you should watch this.