I recently read two books for very different reasons. I never imagined how much they would have in common. Folks who know me–or who have read my book Inheriting the Trade–know that my focus in the area of social justice is on issues of race. When I speak with groups of people at schools or any other setting I also make the connection between racism and other forms of oppression and injustice that continue to plague the world today.

It is along these lines that I highly recommend two seemingly unrelated books. 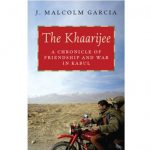 J. Malcolm Garcia, author of The Khaarijee: A Chronicle of Friendship and War in Kabul, and I have something in common. Our books were both edited by the talented Gayatri Patnaik at Beacon Press. She told me this is a really good book. She’s right.

Before reading The Kite Runner most of what I knew about Afghanistan is probably similar to what most Americans knew based on news reports after September 11, 2001. The Taliban… Al Qaida… the American invasion… and it wasn’t long before Afghanistan faded from view when the United States began the war in Iraq. The Kite Runner, though being a novel, was a powerful reminder that it is the people, boys and girls, men and women, who suffer most as a result of war and oppression. I learned more about the people of Afghanistan and Pakistan when I read the powerful Three Cups of Tea. And now I have been further enlightened by reading The Khaarijee.

Malcolm Garcia, a social worker-turned-journalist, went to Afghanistan and Pakistan to cover the war for the Kansas City Star. The Khaarijee is his memoir from several extended visits. Read his book and meet people, families, and communities that have been devastated by war.

Never during the countless meals I’ve shared with Bro and his family… had I ever considered what it must have been like to have a rocket crash into their home while they were enjoying a meal together.

Garcia lived and worked in Afghanistan and Pakistan and yet there was so much he was oblivious to. He would participate in conversations and…

I had not realized how I had offended him. Neither had I appreciated how furious Pakistanis are toward the United States. The men around me are all too aware that it is at America’s bidding that the Pakistani army carries out this campaign.

Missing Words: The Family Handbook on Adult Hearing Loss is a book I read at my wife’s request. Lindi has known she would likely lose her hearing since I first met her almost 25 years ago. Her father has had a cochlear implant for about 20 years and the condition is hereditary. Lindi got her first hearing aid five years ago; her second a couple years later. She has currently lost roughly 75% of her hearing and it has a tremendous impact on her ability to communicate with others. We only watch television shows with closed captions. She can’t enjoy music anymore. Her disability has changed her life–our lives–forever.

Missing Words is written by Kay Thomsett and Eve Nickerson, daughter and mother. Eve writes from the perspective of someone who used to hear and then lost all her hearing. Kay writes from the perspective of a family member who is also directly and profoundly impacted by her mother’s changing condition. They offer advice both to hearing-impaired people as well as to family members and friends of adults who lose their hearing.

The sheer work that hearing-impaired people have to put forth to understand conversation in any circumstance is tremendous. They are straining their minds every second of every conversation, doing three or five or ten times more work than a person with normal hearing would have to do.

In our society, quick witted people are often perceived as able to get things done… Given the fact that we often judge people not only by what they say, but by how they respond to what we say, the hearing-impaired person who has trouble with spoken communication can legitimately feel at a disadvantage.

The authors ask readers to face the truth. And “truth is neither easy nor kind.” The truth is that dealing with, and maintaining a healthy, loving relationship with, a hearing-imparied person is not easy. There are no easy answers offered. As with all successful relationships, maintaining them between disabled and nondisabled people requires hard work and commitment from both sides.

Lindi has done a good job of helping me to understand what I can do to support her; what we can do together to face the changes in our lives due to her hearing loss. But this book was still an eye-opener for me. Missing Words reminds me of how much I can do to support Lindi and to make both of our lives work better in the face of her disability. I hope that our nondisabled friends and other family members will check out this book as well.

I read a book more than a year ago called Privilege, Power, and Difference by Allan G. Johnson. I read the 2nd edition of this book. It differs from the 1st edition in that issues of disability are included in the 2nd along with race, gender, class, sexual orientation, religion, and so on. Among many things, Johnson points out that

As I learn to adapt to living with a woman with a hearing disability I stumble. I make mistakes. But as with any situation we encounter in which we have the opportunity to understand someone whose life experience is different than our own–if we pay attention–we find out how much more we have in common than we have that is different from each other. And as we focus on improving our relationships with “the other” the world becomes a better–and more peaceful–place.

Americans typically don’t know much about the people of Afghanistan and Pakistan and the horrors they face because it is so far away and media stories tend to focus on the impact to Americans, not Afghanis and Pakistanis. Nondisabled people typically don’t know much about people with disabilities because we can find ways to avoid them–and we usually do. Or we offer our sympathy without recognizing our shared humanity.

Discrimination does not favor people with disabilities or those in war-torn countries. Discrimination, oppression, injustice, and war blindly crash forth causing harm to people–people like you and me–based on race, religion, sexual orientation, age, class, and disability. The Khaarijee and Missing Words are two powerful books that remind us each of our role in confronting injustice.