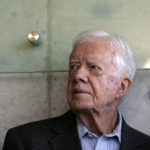 My first thought when I heard the voice shout out “You lie!” during President Obama’s speech before Congress last week was that whichever kook had been so inappropriate was surely being escorted out from the spectator’s gallery by security officials posthaste.

Like everyone else, I learned the next morning that it was a U.S. Congressman from South Carolina who had been so rude. Then several days later Jimmy Carter said on NBC that “an overwhelming portion of the intensely demonstrated animosity toward President Barack Obama is based on the fact that he is a black man.”

Is racism really at play here?

Some have pointed out that Rep. Joe Wilson was one of only seven South Carolina State senators to vote in favor of continuing to fly the Confederate flag over the state house in 2000 and that he said at the time, “The Southern heritage, the Confederate heritage is very honourable.”

But whether Joe Wilson’s shout out was race-based or simply a thoughtless disconnect between his brain and his mouth isn’t as important as the symbolic implication of his act. Due to his position of influence what he says and does carries far more import than that of a teabag protester carrying a sign among many at a political rally.

When someone like Rep. Wilson shouts out disrespectfully at the President in that particular setting it encourages the racist views of others; of those who harbor long-held attitudes of white supremacy and believe Wilson should have said “You lie, boy“–the epithet that reminded generations of African Americans of their “place.”

When Rush Limbaugh says “[I]n Obama’s America, the white kids now get beat up with the black kids cheering” or Glenn Beck says, “This guy is, I believe, a racist”, due to their positions of influence they encourage those whose opposition to Obama is based in racism.

So is racism at play here as former President Carter suggests? Of course it is. It is deeply rooted. Racism has been manifested politically over the past half century in The Southern Strategy. Racism is at the core of the resurgence of the Militia movement. And yes, whether it was his intention or not, racism comes into play as a result of Rep. Wilson’s outburst during President Obama’s speech to Congress. Racism is complexly woven into our system and into each of us as individuals. To undo racism we must carefully, and thoughtfully, call it out as Jimmy Carter has done. We must remain aware and vigilant with our language and tone as we frame our arguments on one side or the other in policy debates. And we must hold accountable those who incite others through irrational, emotional, and racialized fear-mongering.

Thank you to the House of Representatives for rebuking Rep. Wilson. And thank you, President Carter, for your wisdom and your courage.