My first visit to Jackson coincides with my current reading of Parting the Waters: America in the King Years, 1954-63, by Taylor Branch. Being in the community where many significant events occurred during the civil rights era greatly impacted my time there and served as a reminder of the importance of “place”.

Jackson was a key destination for the Freedom Riders. Like the rest of the south, Jackson had segregated schools, restrooms, drinking fountains, and other accommodations. The town experienced boycotts of discriminatory businesses and sit-ins at segregated lunch counters. NAACP Field Secretary Medgar Evers was assassinated in Jackson. 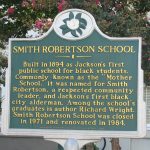 I was there for a 4-day weekend with a dozen fellow members of the Coming to the Table family for a Re-evaluation Counseling workshop. We visited the home of Medgar and Myrlie Evers, which I previously wrote about. My friend Sharon Morgan (who founded Our Black Ancestry) and I both arrived the day before the workshop began. We spent the morning at the Smith Robertson Museum and Cultural Center. Our main interest was in seeing the Emmett Till Traveling Exhibit. Also on display was “Mississippi Blues: A Pictorial History of Poverty in the Rural South” (which is up through September 2009) and many permanent displays that offer a better understanding to visitors about the experience of being African-American in the deep south. 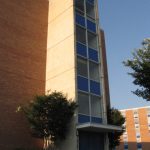 We stayed at Jackson State University, one of over 100 Historically Black Colleges and Universities (HBCU’s) in the United States. Walking through this beautiful campus it is hard to believe that ten days after the National Guard fired on students at Kent State University–killing four–that a similar tragedy unfolded at Jackson State. As at Kent State, students at Jackson protested the escalation of the war in Viet Nam, racism, and in particular, harassment by white motorists driving on Lynch Street, which once divided the campus (Lynch Street is now a beautiful pedestrian space in the middle of campus; closed to vehicular traffic). Just after midnight on May 15, 1970, police opened fire. An estimated 460 rounds struck Alexander Hall, the women’s dorm, killing two students and wounding twelve others. 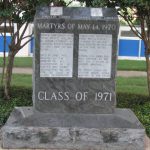 A monument now stands in honor of the two young men who were killed that night. Our last day in Jackson coincided with the arrival of many students moving into the dorms for the beginning of the coming school year. I rode the elevator with a woman and her son. I asked if this was his first year at JSU. It is. He’s transferring from another college. His mother said she graduated from Jackson State in 1972.

“You were here during the shootings,” I said.”

“It was.” A brief pause. A moment of mutual acknowledgment passed between us. Then she told me how much she valued her time here and is excited that her son will attend her alma mater. I hope he takes the time to learn about the rich history of Jackson State; the good as well as the tragic. It will make a difference in his education.

So much has changed in Jackson over the past five decades. And much remains to be done. I spoke with several people of color, both at the museum and at the university. Racism, of course, continues to impact people in Jackson. Many factors continue to divide people: race, economic status, geography, and others. 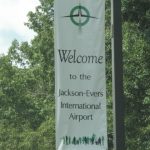 On Sunday, the day I flew home, I arrived at the Jackson-Evers International Airport early so I could spend time taking in the Medgar Wiley Evers Pavilion, which opened this past June. Imagine that. During my lifetime Jackson, Mississippi has been the place where Medgar Evers was murdered by a white supremacist because of his race and it now has named its airport–along with a major boulevard and the library near his former home–in Mr. Evers’ honor.

Time doesn’t heal wounds. We do. In order to heal from past harm we must understand that harm within the context of the history in which it occurred. Spending time learning about, and experiencing, the “places” we visit and the places in which we live is key to our understanding of who we are both as a nation and as individuals. Historical societies, museums, and cemeteries tell much about the towns in which we all live and those we visit.

Take an extra day or two to study the history of the sites you visit. It’ll make a difference in your experience and how you view “places” that matter.

(Note: additional photos from our weekend in Jackson can be seen here)