A Visit to the home of Civil Rights Martyr Medgar Evers in Jackson, Mississippi 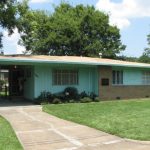 I spent last weekend in Jackson, Mississippi at the last of three retreats dedicated to discovering ways in which the tools of Re-Evaluation Counseling can be applied to the work of Coming to the Table. At our last retreat, in Richmond, Virginia, we spent important time considering the history of the place. We did the same in Jackson.

I have found that no matter how many books I read, movies I watch, or dynamic speakers I hear regarding historic events, there is nothing to compare with being in the place where that historic event took place. I have been to the Door of No Return at Elmina Castle in Ghana from where thousands of African people were kidnapped. I went to Dealey Plaza in Dallas, Texas in 1993 on the 30th anniversary of the assassination of President Kennedy. Earlier this year I visited the National Civil Rights Museum at the Lorraine Motel in Memphis, Tennessee; site of the assassination of Dr. Martin Luther, King, Jr.

History comes alive at such places in ways that no other experience can provide. It is important to connect with the terror of such events in order to come to terms with true history and find ways to heal.

Medgar Evers was the first-ever Field Secretary for the NAACP in Mississippi. He led the effort to register African American people to vote. He led boycotts of Jackson merchants in the early 1960’s that gained national attention. He worked to get James Meredith admitted into the University of Mississippi in 1962–an achievement he was denied years earlier. He made many enemies among those who were threatened by a black man seeking equality, integration, and justice. He was assassinated in his driveway just after midnight on June 12, 1963 with his wife Myrlie, and their three young children, waiting inside their home for his return.

Myrlie and her children moved to Southern California after the death of Medgar. Their home was eventually boarded up. The family donated it to Tougaloo College. It took more than 30 years to bring Medgar’s killer to justice. Rob Reiner directed the film of this long struggle: Ghosts of Mississippi. The filmmakers restored the Evers’ home and made a $20,000 donation to Tougaloo College for its maintenance. They were then able to reopen it as the Medgar Evers Home Museum.

We felt deep sadness upon visiting the Evers’ home. This is sacred ground where a martyr fell. So much has been sacrificed by so many for justice. I stood alone for awhile in Medgar and Myrlie’s bedroom, staring at a photo of their wedding day. Two people in love with dreams of creating a family together; lives marred by the insane hatred of a white man whose “way of life” was threatened. We have come a long way since 1963 in societal attitudes and laws. We also have a very long way to go before the dreams justice and equality by people like Medgar Evers are fully realized.

I honor the members of the Coming to the Table family for your commitment to Medgar Evers’ dream; to truth, justice, mercy, and peace.