Obama in Ghana: Report from Cape Coast by Eric Manu, my friend who was there 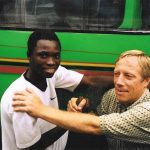 Most folks interested in President Obama’s recent trip to Ghana watched or read reports from traditional news sources. I thought my readers would be interested in hearing about this historic event from the perspective of my friend Eric Manu.

Eric and I met the summer of 2001 when our family traveled to Ghana as part of our journey of discovery that resulted in my book Inheriting the Trade and the PBS/POV documentary film Traces of the Trade. He was 16 years old at the time. Eric and I have stayed in close contact ever since–primarily by e-mail.

This past December Eric graduated from college in Kumasi, Ghana where he studied Hospitality and Tourism. Soon after graduation Eric began working as an intern tour guide at Cape Coast Castle where he and I spent time together in 2001 and where the Obama family recently visited. Eric wrote to me in May that everyone on staff was excited for the American President’s visit and were excited to learn who would have the honor of giving the Obama family a tour of the castle.

Eric wrote me soon after the historic visit. In his words, here’s an excerpt from two e-mails I received:

I hope all is going on well. Finally, finally the President of the U. S. has visited and gone. He really had a very good and inspirational time.

They arrived at Kotoka International Airport, with Air Force one (very big). He came on the 10th of July. On the 11th, he had a breakfast with the President of the republic of Ghana, Professor John Evans Atta Mills, and former presidents Jerry John Rawlings and John Kufour. He then took a helicopter to Cape Coast sports stadium. He first went to the chief’s palace and there had a little talk. Then he came to the castle.

I was much amazed to see him just five meters away from my side in the castle, although his visit was special and very much private to him and his family. Also inside the castle was American security. [As a staff member I was given] an accreditation to be in the castle. [Obama] greeted and wished us well. The chiefs and elders of Cape Coast Palace presented gifts of Kente and sandal–very traditional–and others things.

Due to the tight security I couldn’t have the opportunity to shake his hand in person but a few meters away I waved and he waved back. So simple a president you have. The security seized all private cameras so I could not snap photos.

It was so nice an experience to see your big man and his family face to face. I hope you can also share to the world how the First Lady of the USA wanted to trace her ancestral roots and mother land. The tour was educational also for their children. The family had 1 hour 35 minutes and then [President Obama] came to the crowd to say bye bye .

stay blessed and have a wonderful day .
my love and greetings to the family.
blessings, Kojo

Eric often signs notes to me with his Akan name, Kojo, since he is a Monday-born male. Eric spoke further of his belief that Obama came to Ghana for a meeting of two allies with no hidden agendas; that he spoke of the strong relations between our two nations. An invitation was extended for Obama to return to Ghana anytime; that he has a home in Cape Coast.

One aspect of Obama’s visit that Eric didn’t discuss and I didn’t see much of on the news is the music. I have no doubt that many Ghanaian people expressed themselves through music. I found a few links to give you a sense of how upbeat and infectious music is there. Check out this welcome song that Ghanaian singers and rap artists created and posted on YouTube. Here is Yes, Africa Can.

Thank you Eric, my friend. I’m proud to share your words with my friends in the United States. Blessings to you and your family.