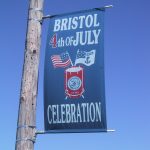 It has been 8 years since I joined nine distant cousins to retrace the triangle slave trade route of our ancestors to make the film Traces of the Trade, and since I began writing Inheriting the Trade about my experience of that journey. I thought some folks might be interested in a bit of what took place “behind the scenes” so I pulled out the notes from my journal from July 4, 2001. We were in Bristol, Rhode Island…

It was raining when I awoke. Though I had a 7:00am “call” this morning to be interviewed for the film, I knew they were interviewing Jim first. And based on the experience of our first few days here I was certain they wouldn’t need me until at least an hour later, so I arrived at the Historical Society at 8:00.

I learned then that my “call” was pushed back to 9:00. I have no complaints. I’ve worked on movie sets before and understand the drill. I have given myself over to the filmmakers. I have no other obligations and I enjoy waiting, relaxing, and talking with people.

In the yard behind the Historical Society building I chatted with Jill, one of the crew members, while I waited. [Jill is not her real name; since this conversation is personal I’m using a pseudonym] We talked about movies, family, the usual. The subject turned to religion. We talked about last night’s family gathering. I told Jill that I was impressed by the fact that the woman who led the exercise to help us with movement and releasing tension–which feels quite valuable for this journey–is an ordained minister in the church I grew up in [Disciples of Christ], and in which I almost became ordained.

Jill asked if I was still a Christian. She immediately caught herself and said something about it being too personal a question. Jill appears both sensitive and intuitive. I told her the question didn’t bother me a bit; that I probably consider myself an agnostic. Her face broke into a pixyish grin. Jill seems to be smiling and at peace all the time. She appears very grounded. She just lit up. She said “That’s what I am!” She said that everyone seems to either “believe” or else is an atheist; but no one is an agnostic.

Her difficulty with the Christian faith is that she doesn’t necessarily believe that her Jewish, Buddhist and Muslim friends are wrong. I told her about a man I knew who, after many decades of not being a member of a church, returned to the faith of his childhood. He rejoined the Church of Christ (Non-Instrumental)–a very conservative denomination–toward the end of his life. He then said that anyone who didn’t belong to his denomination was going to hell; including other people who claimed to be Christians. I said, “It’s like that old joke about dying and going to heaven and getting the grand tour from Saint Peter. ‘Here’s the cafeteria, there’s the workout room, this is the reading club, and oh,’ he whispers, ‘please be very quiet as we pass that door. That’s where the Christians are. They think they’re the only ones here.'”

We both acknowledged how deeply this stuff gets ingrained. Jill was raised Catholic. I was raised in the First Christian Church (Disciples). Even though neither of us is involved in organized religion any longer we were socialized into it. Christianity informs our moral and ethical standards. And the threat of going to hell as a result of our choices? We both acknowledge–with a little chuckle–a twinge of concern with the question, “What if they’re right?”

I told her about Kurt Vonnegut’s book Palm Sunday; how his ancestral religion was basically “Free Thinking.” In his address to graduating college students in 1974 Vonnegut recalled the words that Bertrand Russell claimed he would say to God if he ever met him,

Sir, you did not give us enough information.”

At least the Apostle Thomas was allowed to see the wounds in Jesus’ hands after the resurrection. I believe that if there is a God, and if He’s fair, he’ll have bigger, wider, more open arms than so many “people of faith” would have us believe.

I love conversations like this and am grateful for the shift in the filming schedule. Jim’s interview took longer than anticipated. Mine is being postponed to another day.

The Oldest 4th of July Parade in America

Today was the 216th annual Independence Day Parade in Bristol. So many thoughts are riffling about in my brain. Here we are celebrating our country’s independence from oppressors in England. At the same time the colonists were gaining their own freedom they were running indigenous people off the land they had lived on for centuries and forcing black people to help them build this nation. Too weird.

The Historical Society is located just around the corner from Linden Place [the historic DeWolf family mansion pictured on the cover of Inheriting the Trade. When it was clear that I wouldn’t be interviewed at all today I joined other family members at Linden Place who were waiting for the parade to start. Elizabeth talked about her mixed emotions regarding the mansion and Bristol. She truly loves this town in which she grew up. She comes here willingly and happily by her own choice. She loves her home, her family and her friends. The mixed feelings come from what certain things represent. There is a tacit agreement to avoid certain subjects in civil discussions; the fact that only DeWolf family members could watch the parade from behind the iron fence of Linden Place until it left the family’s ownership in 1989; that only those willing to pay $35 may do so today. In exchange for $35, you get muffins and coffee or juice for breakfast, and hot dogs and potato salad for lunch.

To be fair, this is a fundraiser for the non-profit organization that preserves and operates this 3-story house built in 1810. It is just ironic somehow. Privilege is an awkward and complicated subject. I don’t want to give the impression that I have negative feelings about Linden Place. I’m a member of the Foundation. It’s a beautiful mansion. And these are complicated issues. Let’s leave it there. Elizabeth was here as a child and she worked here as a teenager. When she was here as a DeWolf, she was treated like a DeWolf. When she was here working for the caterer or working in the yard, people wouldn’t give her the time of day. Her complicated feelings run deep.

When the parade began we gathered at the fence surrounding Linden Place to watch it pass… and pass… and pass… This isn’t just the oldest 4th of July parade in America. Surely it is also the longest! There were seven divisions of entries. It lasted almost three hours. Both U.S. Senators from Rhode Island walked the whole route; as did most politicians in the state. It seemed to me that everyone in the state who wasn’t watching the parade was probably in it. 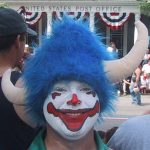 The line down the middle of the road is red, white, and blue instead of yellow or white like most streets. A news helicopter flies overhead. Every building in town is decorated in American flag bunting. People have painted their faces and hair red, white, and blue. I’m told the Fourth is a bigger holiday than Christmas in Bristol. I have no doubt this is true.

When the parade finally ended we walked back to the Historical Society and spent the afternoon talking about money. Fund raising for a documentary film with a first-time director is challenging. They need to raise $50,000 in the next two weeks and a total of $150,000 by Labor Day. Without enough money, they won’t be able to hire a full film crew in Ghana or Cuba.

We talked about the details of the Ghana and Cuba legs of our trip and got a lot of questions answered, which was reassuring. I’m glad Juanita will be with us in Ghana. She lived there for a year so knows what to expect and, I suspect, how best to plan our time there. Then we had dinner together as a cast and crew for the first time since arriving in Bristol on June 30. I liked getting to know everyone better. We’re going to spend a lot of time together this summer.

The fireworks started a little after 9:00pm. We walked to Independence Park to watch. The camera crew was there to catch the fireworks and us going “Ooh! Ahh!”

And another 4th of July has passed into history. I’ve thought more about the meaning of Independence Day than ever before in my life. I do not want there to be any confusion. I am proud to be an American and I believe in our country and what a wonderful place this is to live. I believe in our freedom and in the potential people have here. More than ever before, I recognize that some people have more freedom and more potential than others. The dialogue has begun.

That was eight years ago. Today I’m on the Oregon coast with my grandson who wasn’t even alive back then. The two of us are spending the weekend with some of my oldest friends. We’ll watch fireworks on the beach tonight. Then I’ll tuck him into bed in preparation for more fun on the beach tomorrow.

I think a lot about what this young man inherits; what he learns from his parents, from his teachers, his friends, and from me. I think much differently about Independence Day now than I did before 2001. I’ll talk with him about it when he’s a little older.