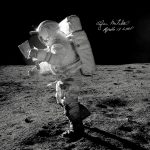 Last weekend I was privileged to attend, and participate in, the Institute of Noetic Sciences (IONS) 13th International Conference in Tucson, Arizona.

I was there at the invitation of my dear friend Belvie Rooks. She and I led a session titled “Inheriting the Trade: Hard Truths about the Legacy of Slavery.” It was a session devoted to what healing looks like; to a recognition for the need to shift our consciousness regarding issues of race as part of the healing process.

I was also honored to work with the youth at the conference; talking with middle and high school students about “Healing People and Communities: Breaking the Cycles of Violence.” IONS does a terrific job working with young people at the conference.

If you don’t know about IONS, which I didn’t until about a year ago, you may be wondering what exactly it is.

Everyone has heard about Apollo 13. Ron Howard made a movie about it starring Tom Hanks. An oxygen tank blew up. Two of the three fuel cells were lost and oxygen was leaking from the one remaining tank at a high rate. Potential catastrophe. Miraculous return to earth with no loss of life. You remember.

Imagine being the astronauts going up in Apollo 14. That would take a special kind of courage, eh? Dr. Edgar Mitchell was the lunar module pilot on that mission. He became the 6th man to walk on the moon. But as incredible as the entire mission was, Mitchell says it was the trip home that impacted him the most. He saw planet Earth floating freely in the vastness of space. He was engulfed by a profound sense of universal connectedness–an epiphany. In Mitchell’s own words:

The presence of divinity became almost palpable, and I knew that life in the universe was not just an accident based on random processes. . . . The knowledge came to me directly.'”

The above is from the IONS website, the organization Mitchell helped found after returning from that mission. “Noetic” comes from the Greek nous, which means something like “intuitive ways of knowing.” The mission of the founders of IONS was to combine scientific research with intuitive knowledge with a goal of transforming human consciousness; to build a bridge between science and spirit. Today, more than three decades later, IONS continues as an international, membership-based, research and education organization.

Mitchell gave one of the keynote addresses in Tucson. This highly respected scientist spoke of the interconnectedness of all life on earth. He said we face a challenge in terms of energy, climate, resources, and population that is unprecedented in the history of our civilization. There have been 5 major extinctions during the earth’s entire history–the last one occurring 65 million years ago. We now face a 6th. For the first time it is due to human causes. We’re destroying the “web of life” on earth. We need that web for survival–it doesn’t need us. The issue we face is not just about saving nature–it is about saving us.

Mitchell–and so many others–call for a transformation in consciousness; a recognition of our interconnectedness with each other and our environment. It will take personal responsibility, civic and corporate responsibility, and government responsibility and incentives to turn this mess around. The need for education and awareness is well founded and we must now design and implement environmentally friendly and sustainable solutions.

This includes using less fuel, more clean energy sources, saving forests and planting trees, public transportation. It means moving from a “growth” oriented mentality to “sustainable” one. Our most challenging problem is this: we can only sustain a global population of 2-3 billion people under the current western standard of living. We now have population of 6.5 billion on our way to 9 billion by 2050.

The warning is clear. If we take no action or too little action we may not survive. The House of Representatives took action late Friday that, for the first time, require limits on pollution that is blamed for global warming. Politics being politics further compromises will no doubt happen as the Senate considers similar legislation and the two houses of congress will then compromise further as they negotiate a final bill.

We face problems–of our own creation–that are reshaping the very face of the planet and its inhabitants. I only hope our elected officials–and each of us–will take action that results in significant enough change. Mitchell’s parting thoughts were taken from Cree prophecy:

When all the trees have been cut down,

When all the animals have been hunted,

When all the waters are polluted,

When all the air is unsafe to breathe,

Only then will you discover that you cannot eat, drink, or breathe money.

When someone with the knowledge, education, experience, and respect of a scientist like Dr. Edgar Mitchell says that our very survival and the survival of most life on our planet is at stake it makes sense to me pay attention.

NOTE: To become a member of IONS, as I have recently done, click here.

Photos taken during the IONS conference, and notes about some of the other stellar speakers at the conference, are on my Facebook page.