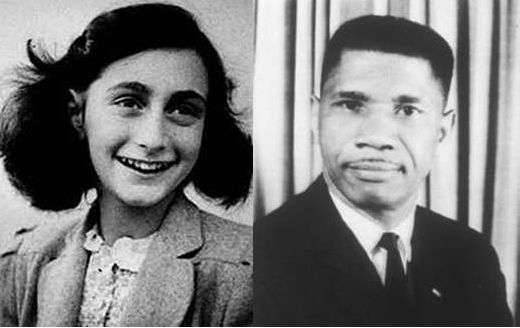 46 years ago today Medgar Evers was murdered in his driveway in Jackson, Mississippi by a white supremacist. He was the NAACP Field Secretary in Mississippi. Medgar’s efforts were instrumental in the desegregation of the University of Mississippi. He investigated the disappearance of Emmett Till, who was lynched in Mississippi in 1955.

80 years ago today Anne Frank was born in Frankfurt, Germany. Less than 16 years later she died of Typhus in Bergen-Belsen concentration camp at the end of World War II. She and her family spent two years in hiding in Amsterdam during which time she kept a diary. The family was betrayed in August 1944. All but Anne’s father Otto soon perished in the camps.

Two days ago another white supremacist went to the Holocaust Museum in Washington, DC. Security guard Stephen Johns intended to help an elderly gentleman by opening the door for him. Moments later Johns was dead. Based on what I’ve read regarding the assailant’s views about black people I have no doubt that Stephen was shot because he was black. I also have no doubt that Stephen Johns’ death saved other lives.

Janet Langhart Cohen‘s play Anne and Emmett was to premiere Wednesday night at the Holocaust Museum. The cast and crew were there rehearsing. Her husband, William Cohen, was there waiting for Janet to arrive. Anne and Emmett dramatizes the imagined after-death meeting between Anne Frank and Emmett Till in a place called Memory. As they discuss the discrimination both experienced due to their ethnicity they conclude that hatred is based in fear.

I sit stunned as I write these words. Why does this insanity continue? When will it end? Violence. Hatred. Racism. Intolerance. Fear. Again and again.

I feel profound sadness for, and send my thoughts and prayers to, the family and friends of Stephen Johns.

Anne Frank and Medgar Evers are linked by more than birth and death on June 12. They were both people of hope. Their legacies, and those of Emmett Till and Stephen Johns, can serve as beacons of inspiration for anyone who believes in justice, equality, and peace.

The question I ask myself today, and the question I hope readers of these words will ask themselves, is “What is my personal commitment to justice? What will I do for equality and peace?”