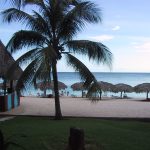 I took this photo while visiting Trinidad, Cuba in 2001 during our family journey that became my book, Inheriting the Trade, and my cousin Katrina Browne’s film Traces of the Trade, which P.O.V. aired on PBS last summer. I always pay close attention to news about Cuba.

At Orbitz we believe passionately in the power of travel to transform lives. And we believe that people should have the freedom to travel wherever they choose.

Americans today have the right to travel to any country in the world except Cuba. Three weeks ago, we launched www.OpenCuba.org, a campaign that gives people a way to petition U.S. leaders to end the 50-year Cuba travel ban and give all Americans the freedom to travel to Cuba.

With Congress considering the bipartisan Freedom to Travel to Cuba Act, the opportunity to end the 50-year ban hangs in the balance.

We recognize that some of you may have different perspectives on this subject; however, our position on this is premised on two core beliefs:

Thank you for considering our request to join us on this issue.

I fully support opening up relations, communications, travel, and all other forms of cooperation between the United States and Cuba. It is absurd that we are such warm partners with China and several other repressive governments yet continue to impose failed Cold War policies against our neighbor off the coast of Florida.

I’m not going to sign the Orbitz petition. It just feels a little too odd to me to sign a petition to support freedom of travel to Cuba led by a travel company.

That said, I am exceedingly encouraged that a major company like Orbitz would take such a step. That would never have happened even five years ago. They would have been too fearful of both political backlash and the response from customers.

I totally loved Stephen Colbert’s hilarious take on opening up Cuba. It seems to me that the winds of change are indeed blowing.

What do you think about opening up Cuba for travel by Americans? I’m interested in what others think, including those who disagree with my position.