Why do African American babies have the highest infant mortality rate? 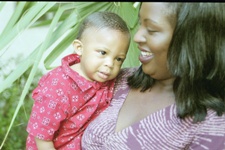 I’ve been invited to speak in San Jose, California this Thursday evening, June 4, by the Santa Clara County Black Infant Health Program Advisory Board. I’ll be discussing our family journey that resulted in the publication of my book, Inheriting the Trade, and my cousin Katrina Browne’s film, Traces of the Trade. I’ll share some of our nation’s hidden history and its impact on past and present health inequities.

These are complex issues that defy simple solutions. What is truly baffling is that in spite of all the advances we’ve made in this country technologically, scientifically, medically, and in the areas of civil rights and equality, the disparity gap in health between black and white people is actually widening.

Santa Clara County Health Department will be providing a packet of information and resources for attendees. Included will be two powerful articles. From RaceWire, the blog for Color Lines is Persistent Peril: Why African American babies have the highest infant mortality rate in the developed world And from the New York Times, Infant Deaths Climb in the South. These two articles offer a glimpse into how present-day health inequities have been inherited as a result of historic inequities.

From the Rice University study, “Black Immigration, Racial Context, and the Black/White Health Disparity” (January 2003), “Compared to all other U.S. racial groups, blacks have the highest rates of morbidity and mortality, lowest rates of insurance coverage, and least access to health care.” There are systemic problems within the health care system that must be challenged and changed if we are to achieve equity in the delivery of health care and wellness in the United States.

If you live in the Bay Area or have friends who do, you can still RSVP for this event as of this writing. The room at the Cambrian Library holds 100 people. The last I heard more than 80 people have signed up so far.

I look forward to an engaging, thought-provoking, and lively conversation confronting a difficult subject.