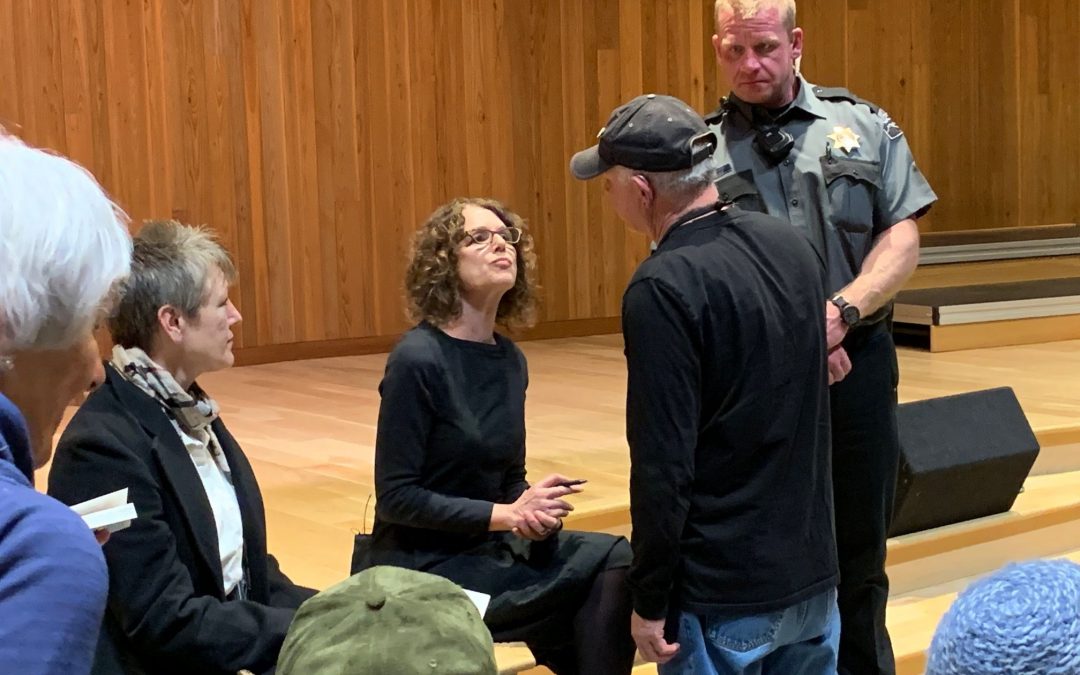 I looked forward to Dr. Robin DiAngelo coming to the town where I live, Bend, Oregon, since her appearance was announced a few months ago by The Nancy R. Chandler Visiting Scholar Program of Central Oregon Community College (COCC). She was the featured speaker for this year’s Season of Nonviolence. I’m a big fan of her work, and we share a publisher: Beacon Press. I’ve not had the opportunity to see her present until now. I reserved tickets for her Wednesday evening presentation as well as her workshop the following morning. I attended with several friends; members of our local Coming to the Table affiliate group.

I’ve read Dr. DiAngelo’s New York Times bestseller, White Fragility (read my review here), and consider it one of the “must read” books for white people to become more fully aware of our own “stuff” around race, how we perpetuate it, and how we become “fragile” in defending ourselves against charges of racism. Jodie Geddes and I include White Fragility in the Recommended Reading section of our new Little Book of Racial Healing.

From this early slide, Dr. DiAngelo spent an hour and a half naming what white people desperately need to know and acknowledge, and what so few of us do. She explained what white fragility is:

“The inability to tolerate racial stress. Racial stress is triggered when our positions, perspectives, or advantages are challenged. White fragility functions to block the challenge and regain white racial equilibrium.”

If you are white and reading this post, please read White Fragility: Why It’s So Hard for White People to Talk About Racism. Check out a similar presentation to what she shared in our town on YouTube. She names the problems, the wounds, the challenges, the racism. She points out that in North America, “we live in a society that is deeply separate and unequal by race.” She doesn’t couch things in comforting words. In fact, her book and presentations are decidedly uncomfortable for most white people because we haven’t done our work in understanding our own connection to racism, its perpetuation, and its impact on all people of color.

So, that’s your homework, my white friends.

But my main purpose in writing this essay is to ponder the meaning(s) of the presence of the security guards.

I sat in the third row with several friends in the sanctuary of the Unitarian Universalist Fellowship. The presentation was moved from Central Oregon Community College to accommodate more people. Her presentations both filled completely, plus waiting lists. When the event began and Dr. DiAngelo was introduced, a tall, strong, white man in uniform stood at the front of the room on the left. Another stood to the right. They looked out at the gathered crowd with serious looks on their faces. They never moved; never showed any emotion or response to anything Dr. DiAngelo said. A few more security guards were stationed elsewhere throughout the sanctuary. During her talk, she shared that she received a death threat last week. Well, I thought, that explains the security guards.

At the conclusion of Dr. DiAngelo’s presentation, one of the guards moved to stand a few feet to her left as she set on the front edge of the stage to talk with attendees and sign copies of her book. He didn’t move. He didn’t blink. No nonsense. Deadly serious.

To the friends I sat next to, including an African American man, I said at the conclusion of her presentation, “I found it really disturbing to have the security guards standing there throughout her talk.”

“I could hardly listen to what she had to say,” my friend replied. “I’m black and he’s a cop.”

I stared at him for a moment, shook my head, and said, “I realize that as disturbing as it is for me, it is so much more for you. In all honesty, I was thinking this is completely unnecessary here. Nothing bad will happen in Bend, Oregon. Especially not in this church. But of course, it can. And my inclination to think otherwise highlights my own racial blinders.”

“This is what I need you and other white people to understand,” said my friend. “This is the impact that I deal with every day.”

I walked over to one of the organizers of the event. I learned the college had received messages from close to a dozen people who were very upset that COCC would bring Robin DiAngelo to town. Very upset. Enough so, apparently, that a team of security guards was hired and was very visible.

After most everyone had left, I spoke to one of the security guards who had been positioned at the front of the room. I asked him how he felt about needing to be there. He started sharing what sounded like a “company line” of just doing his job, etc., etc., and I interrupted.

“What I’m asking is about you personally. How do you feel inside that we live in a town where your presence is needed for an event like this?”

He looked into my eyes, then. It felt like he was really seeing me. “There are some really angry people in the world. They can cause a lot of damage. It’s too bad, but I’m glad we can help make sure everyone stays safe.”

I appreciate the event organizer and the security guard being open with me. Their words remind me of my own blindness to what goes on in our world… in my town. White people unwilling or unable to see our own stuff. White people willing to use violence – in letters to a local college, or in acts of violence – to avoid understanding and admitting that we are the problem. White people are the problem. In a nation founded on racism and white supremacy (the enslavement, murder, rape and centuries of abuse of African people, the annihilation and forced removal of indigenous people, the violence directed at, and theft of land of Mexican people, and so much more) – the foundational elements in the creation of the United States – white fragility is very much alive and well today; causing ongoing harm, and sometimes violent death, to people of color.

Let me be as clear with my readers as Dr. DiAngelo was with us that night. It is up to white people to understand that our ancestors created racism. We have inherited it. Our denial and deflection and fragility perpetuate it. It is on us to eradicate it.

Click here to read my review of White Fragility