When I fantasize about international acclaim, I think about my books being published in the countries included within their pages (in the case of my first two books, Ghana, Cuba, and Tobago), as well as many other countries and languages. I haven’t achieved that level of success with my writing… yet. But I did get interviewed by a Norwegian newspaper, Vårt Land, last month. It’s a start…

If you understand Norwegian, you can read the article here: Vart Land Interview (Norwegian Newspaper, 10 May 13)

The reporter, Ingrid Hovda Storaas, contacted me through my publicist at Beacon Press. She wrote that she was working on a story on “inherited responsibility” for a Norwegian daily print Newspaper. They had recently “published a story on German youths working voluntarily in Norway as a way to ‘pay’ for the fact that their forefathers participated in the German occupation of Norway. A 20-year old boy was asked if he feels he is atoning for his grandfather’s sin (he was a soldier), and put it like this: ‘In a way. I have not inherited his guilt, but I feel I have inherited a responsibility.'” They were now doing a follow-up story with a more global view and had come across Inheriting the Trade in her research.

I agreed to respond to her questions via email. I was particularly interested in this opportunity because my great grandfather, Ole Nicholson, was born in Norway in January 1853. He came with his parents to the United States when he was 4 years old. His wife, Martha Ryen, was the daughter of Norwegian immigrants as well. They lived in Illinois and Iowa. Their daughter, my grandmother, Lida Nicholson married my grandfather, Giles DeWolf around 1915. Consequently, I have very fond feelings for Norway and hope to visit someday.

Since I don’t understand Norwegian, and I suspect most of my friends, family and readers don’t either, here are the reporter’s questions, along with the answers I supplied. If anyone does know Norwegian, I’d be interested in knowing how accurately my answers were translated for her readers.

1) What did you feel/think when you found out your ancestors had been one of the largest and most successful slave owners in America?

At first it was pretty daunting, being connected to such horror. They weren’t just “one of the largest”, they were “the” largest. I soon confronted those feelings and moved through them toward more productive thoughts and feelings.

2) Did you feel embarrassment or guilt, in any kind of way?

This is related to the first question. Guilt or shame or feeling embarrassed are natural reactions to learning such news. But we can also use such feelings to actually shut ourselves off from taking positive steps toward acknowledging the truth and healing historic wounds.

I have a particular connection to this history. The challenging thing for White/European people is to recognize that everyone was/is connected to these historic wounds. 200 years ago, slavery was the driving force in the world economy (much like oil is today). The entire world economy depended on slavery. Everyone, including staunch abolitionists, was impacted. People smoked tobacco, drank coffee, used sugar and rice, wore cotton clothing; all slavery-produced commodities. There is no escaping from the universal connection to a system that was so ubiquitous. So, yes, I feel responsibility to do what I can to raise awareness, make the world better for my grandchildren, and hold people accountable who are in denial or causing additional damage today. That’s the large part of our responsibility as members of the human family: to address the living consequences today of past wounds – and there are many in addition to the system of enslavement. We humans have a long history of oppressing and terrorizing others.

4) Do you think people should feel responsible for things their forefathers did?

I believe the unhealed wounds inflicted in the past get passed down generationally and continue to cause harm. One teacher we met in Ghana described historic slavery as “living wound” from which people are still dying today. Until we clean the wounds properly, we will continue to suffer from racism, sexism, religious intolerance and other forms of oppression and prejudice. Feeling directly responsible for what my ancestors did is illogical. I wasn’t there. I didn’t do it. However, what benefits do I enjoy today as a result? What can I do to heal the wounds? I feel more responsibility as a member of the human family than as a member of the DeWolf family.

5) Why did you choose to confront your family’s history?

My hope is that sharing our family’s story will act as a springboard to a deeper conversation for others. Yes, it can be traumatic to discover that one’s ancestors did horrible things. I believe that if we have the courage to look, most of us will find both heroes and horse thieves in our lineages. The other thing is that racism is SO huge. If looking at one family’s story can give people a glimpse into this huge abyss and perhaps show people that confronting injustice is not as daunting as we may believe, then perhaps more people will be inspired to work toward acknowledging and healing traumatic wounds rather than covering them up and handing them to future generations to deal with.

6) Do you believe it to be your job to apologize for what happened a hundred years ago?

I believe that is a decision each individual confronts and hopefully makes a choice that is useful to them and others. I believe apology is one useful tool among many on the road to reconciliation. I’m glad that the United States Congress has apologized for slavery, for interring Japanese people during World War II, and a few other atrocities. But they haven’t followed up with meaningful repair of the damage. Some folks feel that once an apology is offered we can wash our hands and call things finished. But acknowledgment is but one step. We have a great deal of damage to repair. Structural and systemic racism remain throughout the world.

7) What good has happened because you chose to learn more about this story, do you think?

On a personal level, it has helped me understand more about my own legacy. It has given me the opportunity to share my stories through Inheriting the Trade as well as my new book, Gather at the Table, which is focused on a model of healing of traumatic wounds. It is co-authored by an African American woman, Sharon Morgan, who has become a good friend of mine through our shared experiences. I believe the more we acknowledge and confront painful wounds from the past, and do our best to heal them, we may find a path toward not inflicting so many now and in the future. I don’t think we’re doing a very good job of this so far…

8) What was the experience like, traveling around with relatives learning things you might wish were not true about your ancestors?

The whole experience was incredibly powerful. By the time we embarked on the journey that took us from Rhode Island, to Ghana, to Cuba, and back, I knew the stories were all true. Though I didn’t know this history growing up – I didn’t learn about it until my late 40’s – I did a lot of research on my own and got a pretty clear picture of the history of this family, and of the United States’ role in the system of enslavement. Actually, I found the whole experience quite liberating. Once you make the choice to understand, acknowledge, and confront the truth, it is actually quite liberating and cleansing. It’s like healing any wound. When it festers it hurts. When it is healed, it feels better. And hopefully you learn how not to repeat the inflicting of the wound and teach your children from your experience.

9) Why did you chose to write a book about it?

This is partly answered in question 7. But additionally, I wanted to document this story for my children and grandchildren and for others. I hope that the story of our family healing journey will provide an example for others who need to heal. Our path won’t be their path. But perhaps it will inspire other people to find their path.

10) Is it fruitful for society that people do what you have done – confront their family history like this?

11) Why do you think some people, like you, want to learn more and talk about this, while others feel embarrassed/don’t want to talk about it?

My sense is that many people are fearful about the consequences. What will other people think? Will I lose status? Will my reputation be harmed? As I said earlier, I’ve found this to be a journey leading to liberation. Challenging? Yes. And the best thing I’ve ever done in my life.

And here is the article from the print version of Vårt Land (click on the image to enlarge): 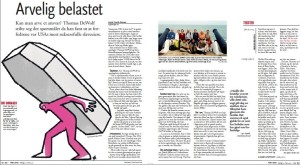